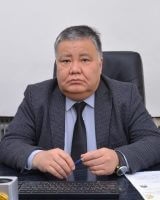 In 1989 he successfully defended his thesis for the degree of candidate of medical sciences on the topic: "Evaluation of the effectiveness of draining sorbents and biologically active compositions on the its basis in the complex treatment of purulent wounds." From 1989 to the present, he has been working at I.K. Akhunbaev Kyrgyz State Medical Academy as an assistant, associate professor, professor and then as a Head of the Department of Hospital Surgery with the course of Operative Surgery named after M.M. Mamakeeva. Since 1997 he has been working at the National Surgical Center (NSC) of the Ministry of Health of the Kyrgyz Republic. From 2000 to 2001 works as a Deputy Director of the NHC for medical work. From 2001 to 2016 worked as a Deputy Director of the National Art Center for Scientific Work. In 2004 he successfully defended his doctoral dissertation on the topic "Medical and social analysis of acute surgical pathology and emergency surgical care for acute diseases of the abdominal organs in the Kyrgyz Republic."

From August 2016 to the present, he has been working as a Vice-Rector for scientific and medical work of the I.K. Akhunbaeva Kyrgyz State Medical Academy.