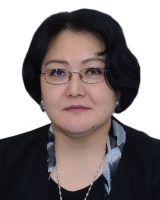 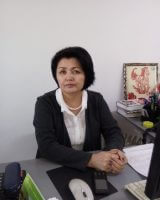 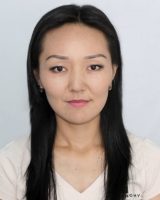 On June 29 of 1999, a Decree of the Government of the Kyrgyz Republic “On Approving the National Program for the Support of Persons with Disabilities” was issued at the request of the representative of “The Society of the Blind and Deaf” of the Kyrgyz Republic, and with the consent of the rector on the basis of the medical school Kyrgyz State Medical Academy named after I.K Akhunbaev, was opened the Nurse department - a massage therapist specialty with a training period of 1 year 10 months, with the purpose of support for the visually impaired (grant education)". E-mail address of medical school  at KSMA: 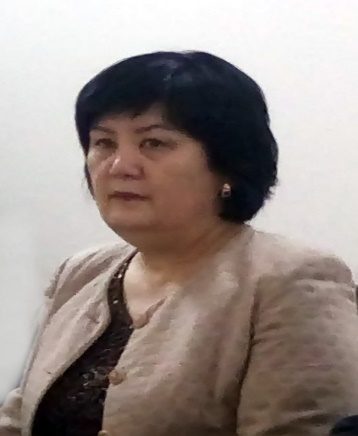 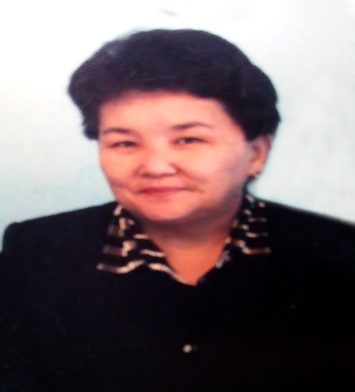 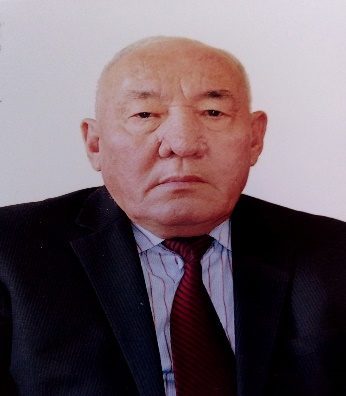 Honored Worker of the Ministry of Health of the Kyrgyz Republic, MD, Associate Professor Maatov T.O. 2005-2017

Improving the level, social status of the visually impaired, the development of intellectual, professional abilities.

In total 24 subjects. For each of these subjects are training programs, teaching materials, and syllabuses.

The programs contain a list of theoretical and a list of practical skills that students should learn. For every sections and topics, the current control of knowledge is provided and at the end of the course - a state exam.

Every student that mastering the curriculum are rated at -5 (excellent), 4 (good), 3 (satisfactory), 2 (unsatisfactory) in accordance with the regulation on the organization of intermediate and final certification of students at the Kyrgyz State Medical Academy. The used system is a five-point for knowledge assessment.

Lectures and practical classes on the program are conducted by the faculty of the Kyrgyz State Medical Academy named after I.K. Akhunbaev in the departments. 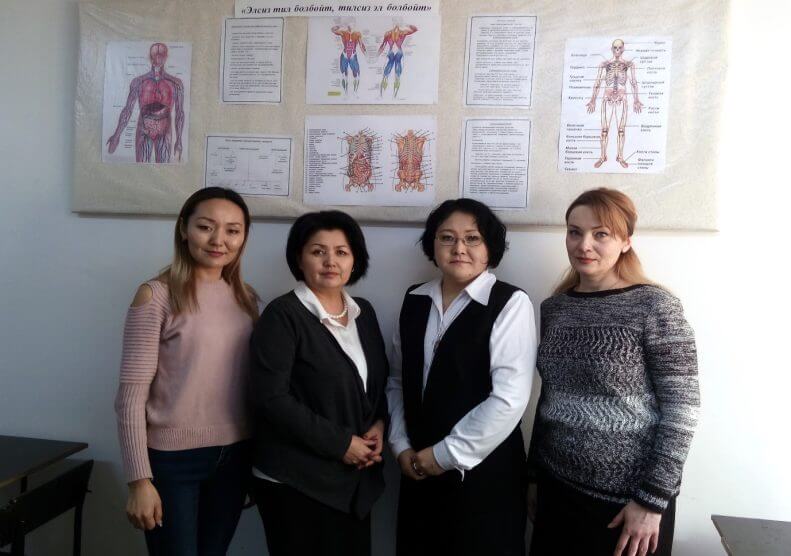 The collective  medical school of the Kyrgyz  State Medical Academy named after I.K.Akhunbaev

With the exception of the 1st semester, each academic semester ends with a practical training. All practice time is intended for the professional training of qualified massage therapists. Students with partial and complete lack of vision have increased sensitivity of the fingers, which is an advantage when performing massage. 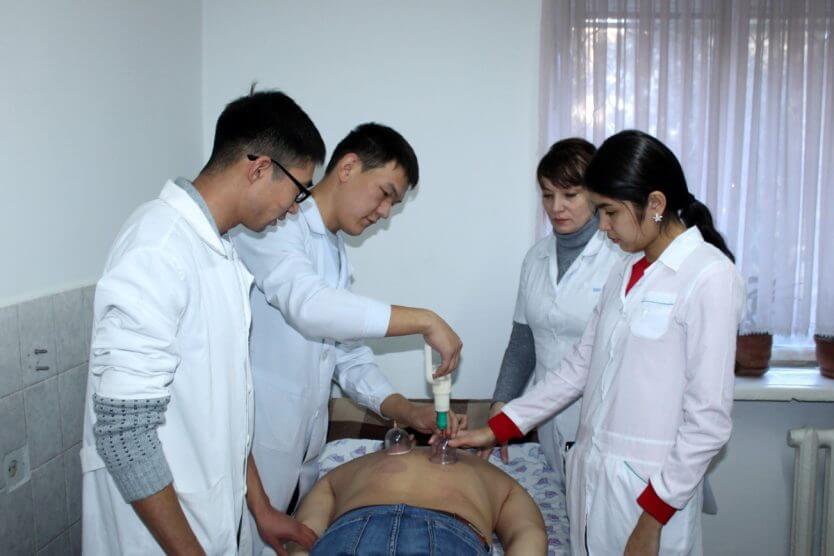 Popenko N.A. during the classes of technique in massage.

The essential part of the learning process is on practice. In the teaching visually impaired and blind students, the teacher teaches each student individually, through direct contact of his hands and the hands of student. Medical School at KSMA I.K. Akhunbaeva is equipped with educational literature.

In medical school KSMA named after I.K. Akhunbaev come from all regions of the republic. Guidance KSMA by I.K. Akhunbaeva make a lot of efforts to provide students from among the visually impaired with everything necessary for organizing a full-fledged educational process. All interested students are given the opportunity to live in the hostel of KSMA. I.K. Akhunbaeva on privileges terms, students receive a scholarship, medical assistance at the medical center of KSMA. The leadership of the KSMA, the collective at the KSMA make sure that students feel like full members of the university, along with all students, developing themselves.

Annually, 3-4 graduates receive a diploma with honors among graduates. Also from 2003 to 2008 by agreement with the administration and the department of international relations of KSMA I.K. Akhunbaeva, for four years, volunteers from Japan worked with students. They helped our students learn the technique of oriental massage used in Japan.

A volunteer Reina Murat worked in 2005-2007, Shin Iti Saito worked in 2007-2008. They not only learned oriental massage, but also learned Japanese language to those who wish, and also introduced students to the history, culture, way of life, and geography of Japan.

Since 2012, students at the medical school of KSMA  studied the Japanese language, and because of the selection, Zhorobekova Shirin, a student with I-group a disability studied Japanese language for a year under the supervision of a Japanese volunteer UEKUSA and participated in a competition for knowledge of the Japanese language and the opportunity to study in Japan. (IAYI) in the international association of the visually impaired in 2013 in the city of Tokyo.

Zhorobekova Shirin studied Japanese language in depth for 6 months, then she completed basic education for 3 years at a school for the blind for three types of therapy: massage, acupuncture (reflexology, acupuncture). After graduation, the student returned to  medical school at KSMA and volunteered to teach Japanese language to interested  students medical school at KSMA for two years (2017-2018-2019)

Over these years, 153 graduates received masseur diplomas. Many graduates work in their specialty.

Students of medical school at KSMA named after I.K. Akhunbaeva participate in various local and international projects. In the spring season of 2013, students of the medical school at KSMA disabilities of I-group participated in the international project of the Kyrgyz Republic with the financial support of the Ministry of Foreign Affairs of Finland “Braille literacy” on the topic: “The key to the world of equal opportunities. 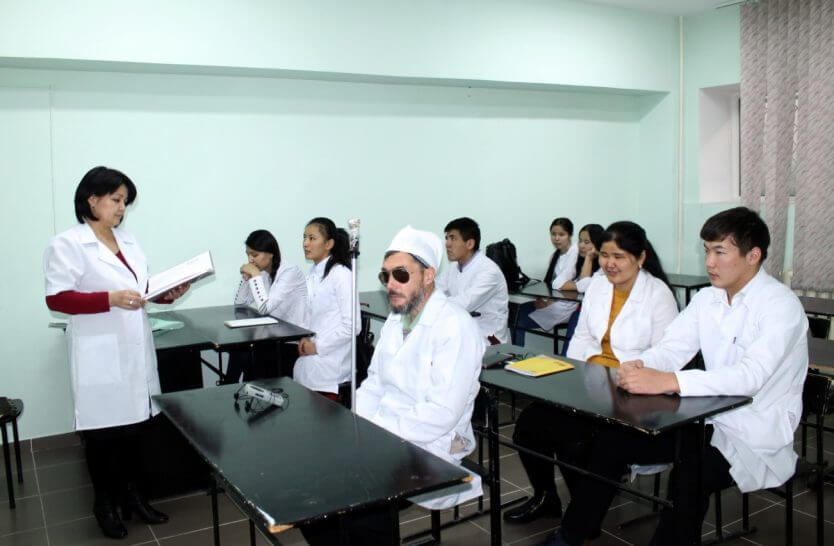 Students during a lecture on diabetes in pediatrics, teacher A. Zhumalieva

Students of the medical school are talented. They are engaged in hobby art: sing, play the guitar, on the komuz. 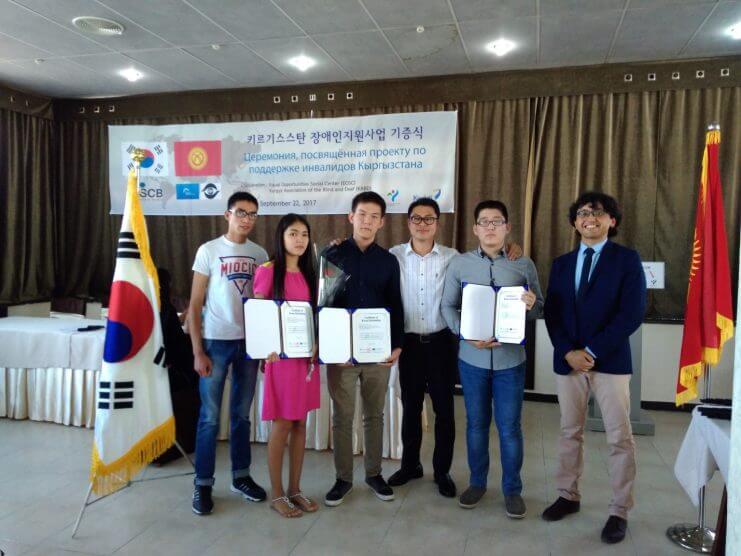 Students of  medical school of at KSMA are engaged in sports. Students participated in the “Run the Silk Road” International Marathon (double) Sharshenaliev J.-graduate 2012 (10km) and student of first course B. Mirzamamytov were prizewinners in the 21 km. medical school  student at KSMA, Musabaeva Zh. participated in the chess championship among PWDs and took the third prize.

Also the electronic library of school is fully equipped with audio books, Braille books, students are provided with voice recorders and walking sticks. 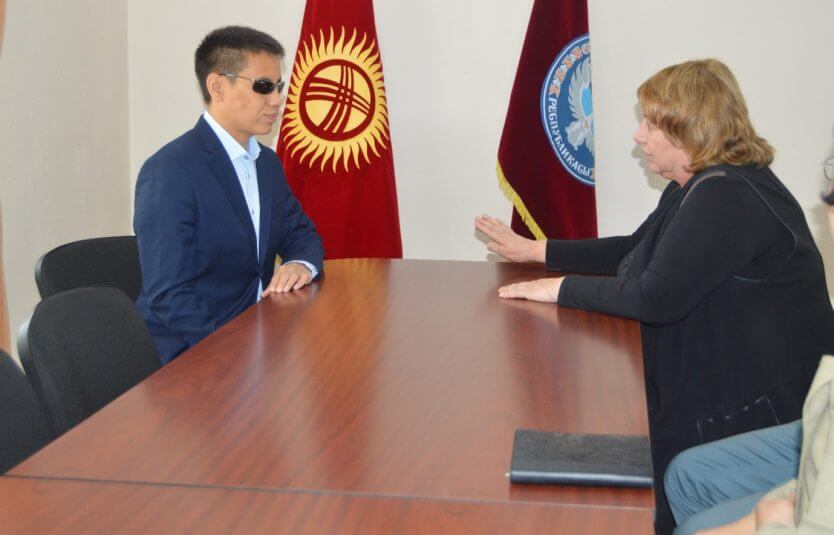 Meeting of the rector of KSMA named after I.K. Akhunbaeva I.O. Kudaibergenova with a deputy of the Jogorku Kenesh of the Kyrgyz Republic D.D. Bekeshov 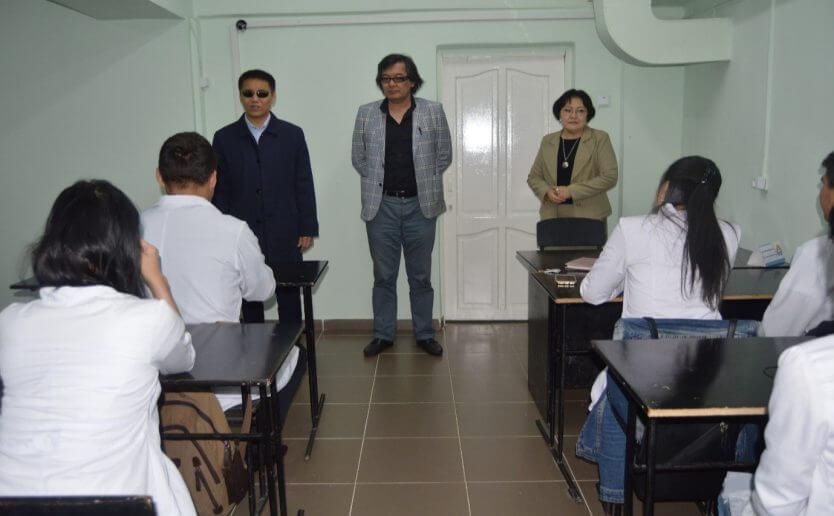 Meeting of the deputy of the Jogorku Kenesh of the Kyrgyz Republic, deputy chairman of the committee on economic and fiscal policy D.D. Bekeshev with the leadership of KSMA: pro-recess for academic work E.Sh. Alymbaev and students of the Moscow State University named after I.K.Akhunbaev 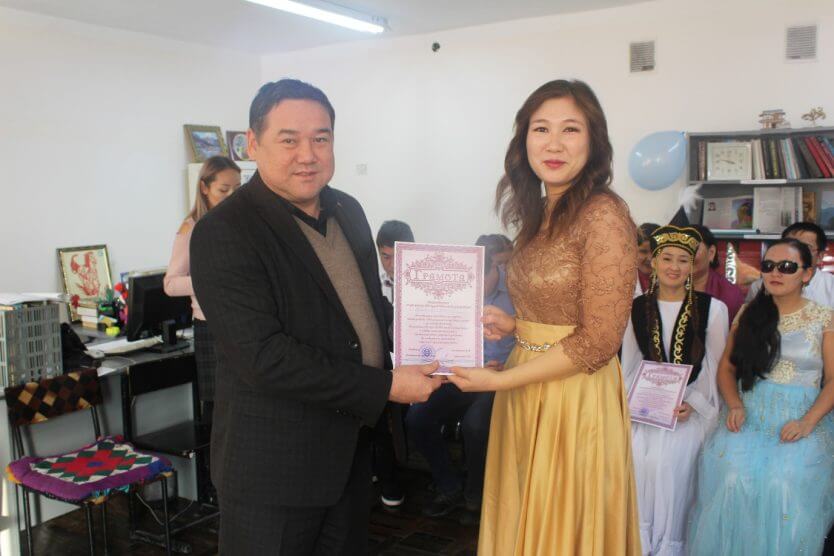 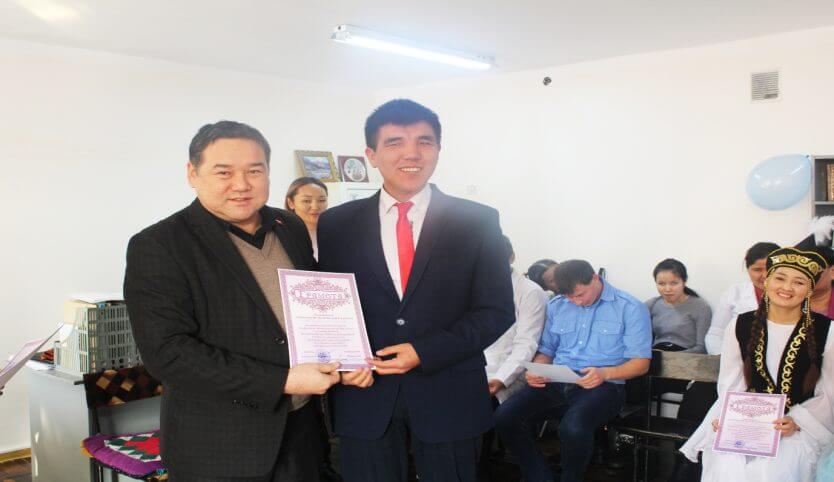 Vice-rector for the state language and educational worker of KSMA K.B. Yrysov on the graduation, students for their active participation in organizational activities of medical school  at KSMA named after I.K. Akhunbaeva 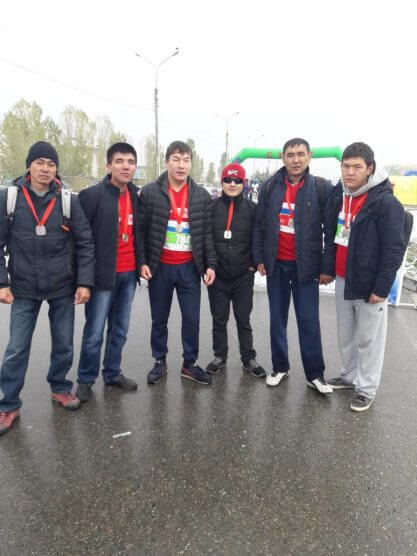 Students participants in the “Run the Silk Road” International Marathon 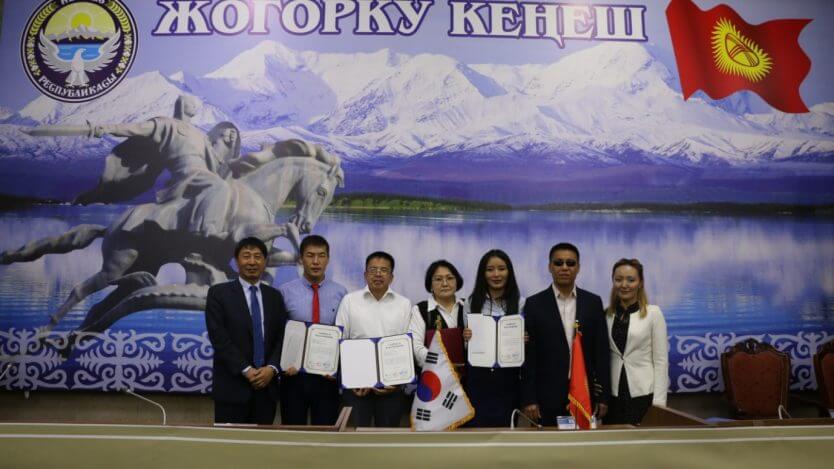 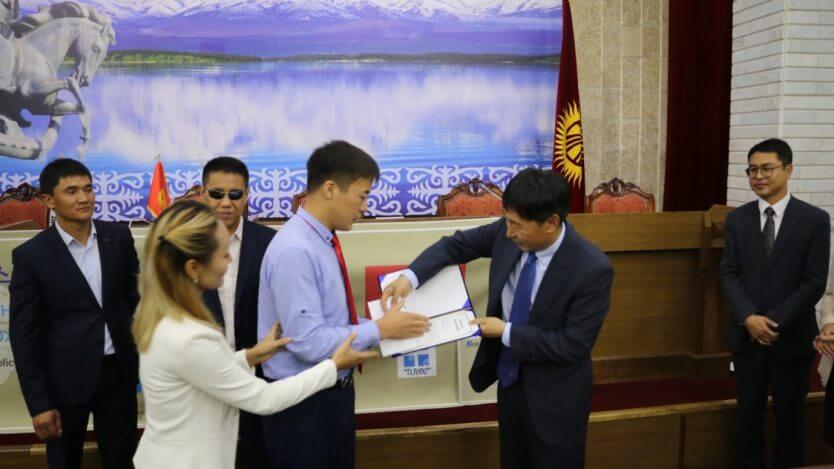 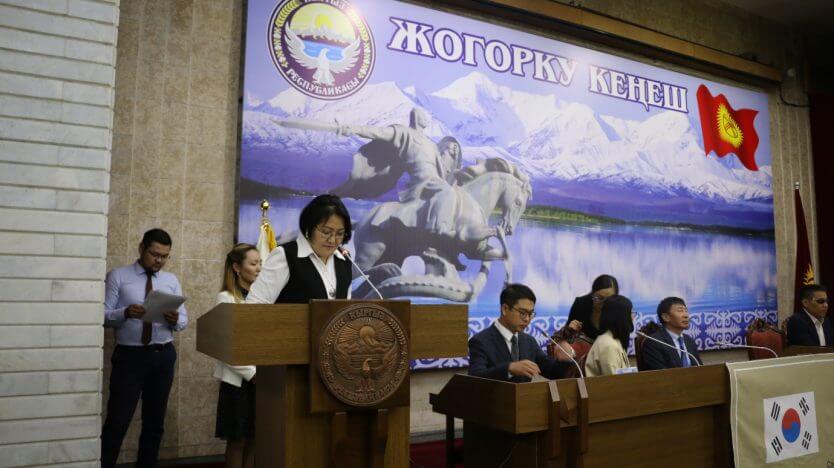 Presentation of the Letter of Thanks by the Director  Medical School of the Kyrgyz  State Medical Akademy named after I.K. Akhunbaeva N.M. Asanbekova 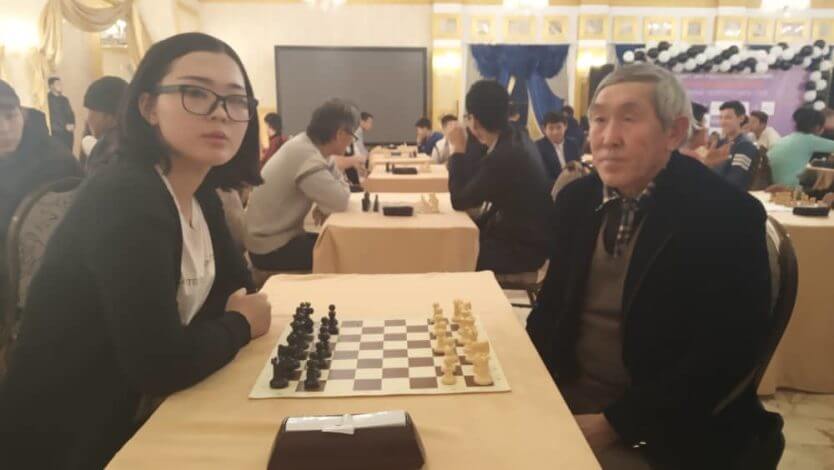 Student of the Medical School Musabaeva J. - participant of the chess championship among PWDs who won the third prize. 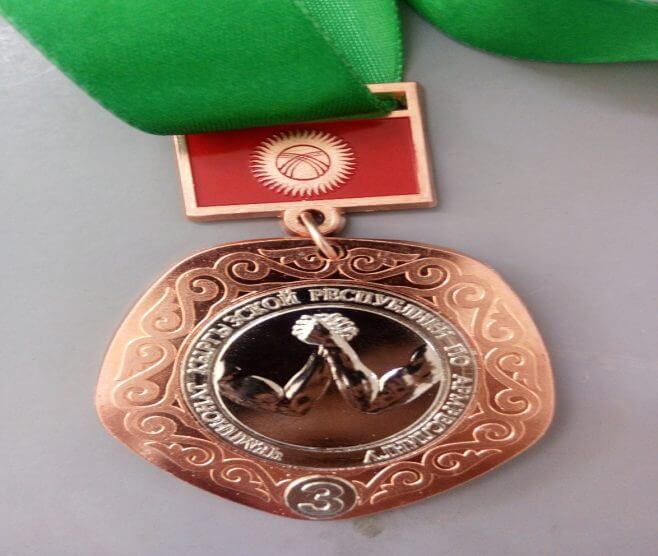 Medal of A.U. Zhaparov for 3rd place in the 20th sports day of Bishkek by armwrestling, “Your health is in your hands”.